Home  ❭  News   ❭   Dr. Tim Westley Winning Hearts and Support throughout Texas as he strives to become the next Commissioner of the General Land Office.

Dr. Tim Westley Winning Hearts and Support throughout Texas as he strives to become the next Commissioner of the General Land Office.

Dr. Tim Westley is Winning Hearts & Support Throughout Texas in His Bid to Become the Next Commissioner of the General Land Office. 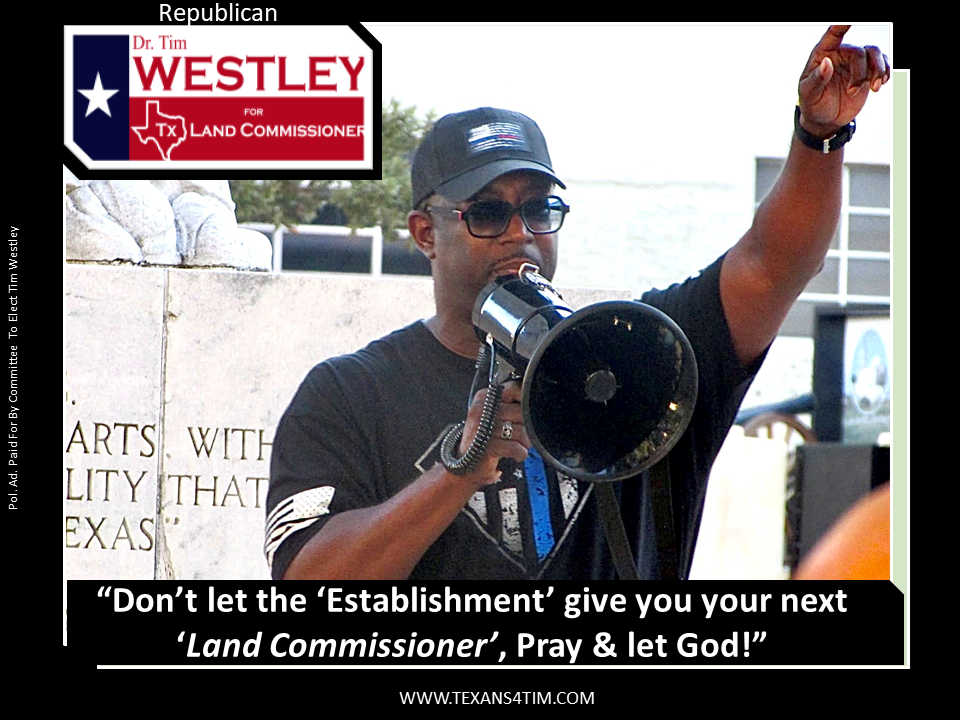 Selma, TX, February 21, 2022—Voters who had the opportunity to hear Dr. Westley speak can agree on one thing, he is a dynamic speaker who wins over whatever crowd he is addressing.   Beyond being dynamic, he is obviously knowledgeable about the subject matter he discusses and makes it plain for everyone in the room.  He is counting on his experience engaging Republicans throughout the state in his position as Historian for the Republican Party of Texas and that of being a two-time Republican nominee for U.S. Congress to push him over the edge.

Dr. Westley jokingly says he is the best candidate many people have never heard of.  However, the latter may not be the case anymore as the word is spreading quickly about this Historian, Educator, Author, Statesman, etc. He has challenged audiences to view all candidates in his race, to Google each, visit their websites, and learn more about all, stating with confidence he will be the best choice for most.

Whether he is able to build on his position as Historian and work done for the Republican Party of Texas to become the next Land Commissioner remains to be seen.  However, what is obvious is his ability to ignite a crowd and win over hearts and support within minutes of speaking.  If enough people find out about him and his candidacy before casting a vote, he believes he is well on his way to becoming the next Commissioner of the General Land Office.